2/ Northern Madagascar, a sanctuary of nature or Vanilla triangle?

This tour will bring you to the Malagasy vanilla triangle. You will discover and explore some virgin forests of the north with their unique wildlife. Landscapes remind of the fareast with green tropical rainforests and numerous streams and rivers.

In the morning, transfer to the Tana airport for the flight to Sambava.   A car  and driver will meet you at the airfield and bring you to Sambava along the beautiful coastal road of the east. The landscape is dominated by palm and banana trees, bamboo. We are now in the famous “vanilla triangle” which is reputed to be the richest region of the country.

After breakfast, by 4×4 to Manantenina, at the foot of the massif. This is as far as the car can go.  After a 2 hour/4, 6 kilometres walk, arrival at the entrance of the park. From the park’s entrance it is a further 2.5hours/3.6 kilometres before reaching “Camp Mantella. Then we continue about 1hour and half trek to reach Camp Marojejia. The last meters of the trail have 450 meters of uphill climb, which takes quite an  effort. If the almost permanently present clouds clear up, a breathtaking view over the towering Marojejy summit surrounded by fabulous forests will make you forget painful feet, blisters, leeches’ bites and soaked clothes. Overnight on camping

Marojejy National Park : one of the most strikingly beautiful and wild areas of Madagascar. It is unique in the world, a place of dense, jungle rainforests, sheer cliffs, and plants and animals found nowhere else on earth. Marojejy National Park comprises 60,050 hectares (148,387 acres) of land, and protects the entire Marojejy Massif. The forests, ranging from low altitude rain forest through to high altitude montane scrub, harbor an impressive list of plants and animals: at least 275 species of ferns, 35 species of palms, 149 species of amphibians and reptiles, and 118 species of birds. The park is also home to eleven species of 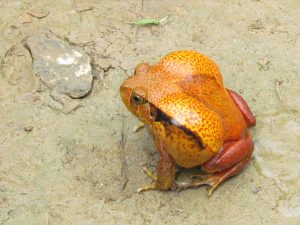 lemurs, including the critically endangered Silky Sifaka (Propithecus candidus). Concerning the fauna, 150 species of amphibians and reptiles live in Marojejy, including 60 frogs such as the green climbing mantilla, leaf-tailed geckos, brookesia chameleons and lots of leeches. There are 45 mammal species, among them 11 lemur species. The most representative is the critically endangered silky sifaka (which only occurs here and in Anjanaharibe-Sud Reserve). Other lemurs found here are Indri, red-bellied lemur, Eastern woolly lemur, aye-aye, bamboo lemur or Weasel sportive lemur. Birds are also very well represented: 118 species have been observed so far, such as helmet vanga, Madagascar serpent-eagle, velvet asity, cryptic warbler, short-legged ground-roller or Scaly ground-roller

2 days stay in Camp Mantella for different expeditions and hike inside Marojejy,  to explore this unique and pristine primary tropical forest. It will be an opportunity to spot and track the unique “Silky Sifaka”, a lemurs species only found in Marojejey. We will also  hike to Humbert waterfall which is about 1 hour walk. At dusk there is a short night walk. Night in Camping

Early in the morning head on to Sambava, Nestled in small bay, sheltered by  luxuriant vegetation such as bamboo, banana and palm trees, Sambava is one the most prosperous cities in the north and  the capital of  the vanilla triangle. Drive onwards to Vohemar, about 3 hours through the green, peaceful landscape of the east.  Arrival in Vohémar at the end of the afternoon. Overnight in Hotel.

Today drive to Daraina which is about 71 km from Vohemar. From Vohemar the landscape is changing into a dry, deserted landscape. The track of 71 km will take  6 to 7 hours to drive. Arrival in Daraina at the end of afternoon. We hike in the Daraina National Park. Overnight on camping

A full day expedition in Daraina Reserve. A mosaic of rolling hills covered with patches of deciduous and semi-evergreen forest, which is one of the richest and most ecologically sensitive areas in the north. The principal reason for its importance is the golden-crowned sifaka, one of the world’s rarest primates, that is found here and nowhere else. Other lemurs are also seen with regularity including crowned lemurs, and Sanford’s brown lemurs and even, occasionally, the aye-aye. Recently a new lemur 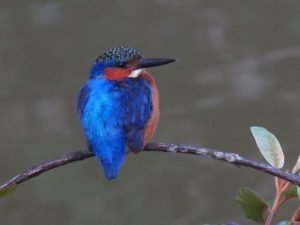 species has been discovered “fork-marked lemurs”. Forked-marked lemurs belong to the genus, or group of species, called Phaner. If confirmed as a new species, this would be only the fifth member of that group. Natural ecosystems in Daraina have been transformed and fragmented by human activities. Currently, the area presents a complex and rich mosaic of small, medium, and large forest fragments, interwoven by a continuous matrix of anthropogenic grasslands and croplands. Total size of the forested area comprises approximately 44,000 ha. Yet, only nine forest fragments in the region have more than 1,000 ha while none of them exceeds 15,000 ha.

Despite the fact that the forests found throughout the region are highly fragmented, the floral and faunal communities found in the area are rich and diverse. Overnight in hotel. 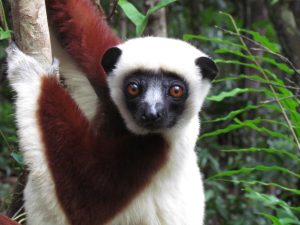 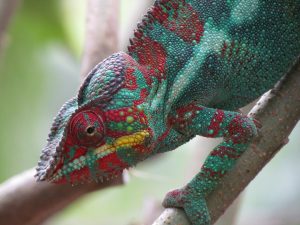 Drive the 100 km of dirt road to Ambilobe. From there we’ll take the tar road of 20 km to reach Ankarana National Park. Created in 1956, Ankarana National Park covers an area of 182,5 km². It is a spectacularly eroded limestone fortress of sharp ridges, patches of dense tropical jungle, deciduous forest, deep caves and canyons (actually the biggest underground network of Africa) and rushing rivers. With an annual rainfall of almost 2000 mm, the underlying rocks undergo heavy erosion producing amazing karst topography: its most known result is the fantastically eroded limestone spires, known as “tsingy”. The Park is in fact one of the most visited specially among hikers: it offers incredible trails, unique and terrific landscapes and a lot of animals. As we come in the eastern side, we’ll overnight in Mahamasina East for the night. Overnight in hotel

Many hikes can be done, one of them is the classic 6-hours circuit from Mahamasina. It includes the visit of “perte de riviere”, the “Chauvessouris cavl”, “petit Tsingy”, the “Ambahibe cave” and the panoramic point of “Ambohimalaza”. Including the “Lac vert” and “Grand Tsingy” will involve a more strenuous trekking, which is however extraordinarily rewarding. More than 350 plant species grow in Ankarana. The luxuriant forests around the gorge are always green and are the richest ones in number of species. 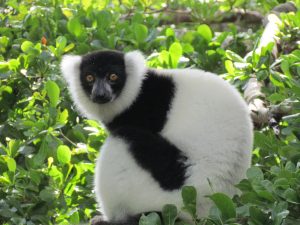 Some significant species are the “vazaha tree”, pandanus, ficuses ad the endemic baobab Adansonia madagascarensis. Then another possibility is from Matsaborimanga where several half-day trails of average difficulty will include the cages of Milainteny and Andrafiabe, the “Cathedral”, the Lac vert and the grand Tsingy. In Amboandriky, the cave of the crocodiles and Lac Mangily are the main interesting points. The Antakarana is the main ethnic group who lives in this region. They subsist on growing vegetables, chicken and cattle and apiculture. Although they still practice slash and burn agriculture, the biggest threat for Ankarana is the rapidly increasing sapphire mining and the illegal cut of precious woods. Ankarana  is one of Madagascar’s most rewarding hiking destinations. The trails lead to awesome viewpoints on ridges above hundreds of limestone needles. Getting into the centre of the park requires a guide and coping with high temperatures (up to 37° in March and April) and scorpions. The best time of year to visit is during the dry season, from April to November. Overnight in hotel In the morning with our 4X4, drive northwards to Diego. On the way, we’ll visit the “ Tsingy Rouge” the unusual limestone pinnacle formations.  The Red Tsingy is a geologic oddity sculpted by erosion into a completely unique work of nature. It is completely unlike other better-known limestone Tsingy. We’ll reach Montagne d’Ambre before lunch. We check-in in hotel In the afternoon, we begin our walk in the park. (Amber Mountain) National Park is located around 30 km south of Diego Suarez. It was established in 1958 and protects a total area of 185km². This massif rises from the surrounding dry region forming an isolated stretch of montane rainforest covering an area of 18.200 hectares and lying at altitudes between 800 and 1.470 metres. The park offers a great biodiversity: a huge tropical forest with endemic fauna and flora, luxuriant vegetation and many waterfalls and volcanic lakes. The climate is perfect, the cool air refreshes after the heat of the lowlands. The dominant ethnic groups are the Sakavala and the Antankarana. A big number of animal species inhabit the National Park. To begin with, 25 species of mammals, among them 6 carnivores such as the ring-tailed mongoose and the fossa, and 8 lemurs: Sanford’s brown lemur, crowned lemur, lesser bamboo lemur and are five species of nocturnal lemurs. Besides these forests are the home of 75 different bird species (35 of which are endemic and even locally endemic, like the Amber Mountain rock-thrush ), 60 reptiles, such as tiny stump-tailed chameleons, leaf-tailed geckos and snakes, 35 frogs and more than 40 butterflies. Back in your lodge at the end of afternoon. Overnight in your lodge

After breakfast, our 4X4 will bring you to the entrance of the park. The easiest and most visited one goes to the Sacred Waterfall (Cascade Sacree). It is a short and very rewarding walk to a waterfall falling into a pool where you have good chances to spot some lemurs and birds. There are two more walks ending in waterfalls: The Cascade Antankarana circuit is also easy and not long, the Cascade Antomboka is a little bit harder. Other treks lead to some crater lakes. The shortest walk is to the Lac de la Coupe Verte, with nice views of the forest. For visiting Lac Grand and Lac Maudit you will need the whole day.It is also possible to climb up to the Amber Mountain itself and enjoy a spectacular view over all the forest beneath you. Most people plan a two-days-trip and camp one night at the Lac Grand, but if you are used to long treks you can do it in just one day too. At the end of the afternoon, drive to Diego. Overnight in hotel

Day at leisure. Many excursions can be done around Diego: “ Montagne des Français”, it  is a limestone mountain range covered with a dry forest typical of the area. It is now a natural reserve which also suitable for climbing. Starting from the Ramena road, a botanical path allows to observe several kinds of baobabs (among those the Andasonia Suarensis typical of the Diego bay) and some succulent endemic plants.

This path is also walked on by the Christians on Good Friday. Climbing along the flanks of the mountain you can discover the stunning landscape of the Diego Suarez bay and reach the summit where an old camp of “the foreign legion” can be accessed thanks to a gallery dug into the rock. Down below lies the Betaitra plain where zebu herds quietly graze, facing “the Sugar loaf”, a sacred islet planted in the middle of the bay in front of the plateau on which stands the city of Diego Suarez. At the foot of the mountain the Ramena road, 28km long, follows the coast down to the small fishermen village and its large beach of fine sand.

Ramena is a very popular spot where Diego Suarez inhabitants like to spend weekends and holydays. It also used to be an important place for the French army which had set up two military camps, one at Orangea on the sea side next to the channel, the other at Ankorika on the heights which overlook Ramena. Overnight in hotel

Morning at leisure. At 12.30, transfer to the airport to fly to Tana.