The “Route Nationale 7” offers a general overview of Madagascar. With 960 km of tar road, it wanders through a wide variety of landscapes from the central highland to the thorny bush of the south.  Every day, the landscape and people’s features change, bringing new scenery and traveling through the territory of different tribes. The tour starts with the Highlands, the “Asian part of the island”, followed by the tropical rainforest of the east:  “Ranomafana National Park” with its luxuriant vegetation, home to many endemic species. Further south, the rocky mountain chain of Andringitra rises, serves as a transition between the Asian and African parts of Madagascar. The wide-opened and empty savanna of the “Plateau de Horombe” is a welcome to the African part. The hike in “Isalo National Park” a massif of eroded sandstone mountain is just breathtaking. The last 240 km between Isalo and Tuléar is real Africa, with baobabs, tamarind trees and thorny bush. We are in the territory of  Antandroy and Mahafaly tribes, from Bantou origin. The “Route Nationale 7” ends on the coast in Tuléar, the 3rd harbor of the country.

The variety of landscapes and people

After breakfast, if time permits, we have city tour of Tana, the capital of Madagascar. Then with a private car, 3 to 4 hour drive southward to Antsirabe across the highland landscape with its beautiful teraced rice-fields and its spectacular eroded hills called “lavaka”. Optional stop in Ambatolampy. An agricultural city, it is also known for its aluminum recycling workshops that we might visit during the weekdays. The next hours, we’ll drive among rural scenery with thatched roof villages, valleys, rivers, rice and vegetables fields. This region supplies vegetables and rice to almost the whole country.  Arrival in Antsirabe, if time permits, well have a short city tours, visit  a lapidary of semi-precious gem, then a workshop making  “pousse pousse” and cars in miniature. Overnight in hotel on BB.

After breakfast, drive towards Ranomafana. On the way drive past terraced rice fields, pine and eucalyptus forests. One thing which marks the Highlands is its architecture. Almost all houses are made from brick, with ornately carved wooden balconies and shutters with nice colors. Stop in Ambositra best known for woodcarving and visit of a workshop. Continuation to Ranomafana for an extra 3 to 4 hours. The landscape changes into a lush vegetation, and tropical forest on both sides, sometimes interrupted by small villages where people sell bananas or charcoal. Arrival in Ranomafana late in the afternoon. Overnight in hotel on BB.

4 hours hike in the forest with a local guide to see 12 species of lemurs, Ranomafana is the most important site of lemurs in Madagascar, it is the only confirmed site for the two rarest species the greater bamboo lemur Hapalemur simus and the golden bamboo lemur Hapalemur aureus. More than 100 birds, five species of viverrids, reptiles, lizards, butterflies and other insects have been recorded in this park. Various orchids such as Bulbophyllum and Eulophellia, steep mountains, dramatic waterfalls and natural hot springs make this endangered and exotic forest charming and unusual . The name Ranomafana means ” hot water ” due to its thermal springs. Overnight in hotel on BB.

Morning, we’ll have 1 hour drive to Fianarantsoa, the capital of Betsileo tribes, the  second largest tribe of the Highlands, also the second most populated city of the country after Antananarivo. From there,  60mn drive to Ambalavao and visit the “Anteimoro paper” workshop; Paper making was introduced in Madagascar by Arab traders. Then we’ll visit ANJA, a  park run by the local community where part of the income serves to pay the teachers of the local school. We will spot ringtail lemurs during our 2 hours hike inside the park. We’ll head on to Ihosy,  the capital of Bara tribes, through the mountain chain of Andringitra, which serves as a transition between green Highland and the dry South. The landscape is more and more grandiose. Huge Granite blocks are marking the spacious and empty plains. It is ” the gate of the south ” which marks the end of the Highlands and the beginning of the South. We feel like being swallowed by this emptiness, as we pass through the “plateau de Horombe”  with its spacious red soil, reminding us of ” no man’s land”. In various places we can see zebu herds, accompanied by Bara men with rifles.  Arrival in Isalo at the end of the afternoon. Overnight in your hotel.

4 to 6 hours hike in ISALO National Park. The park covers an area of 81,540 ha comprising the entire stretch of the Isalo massif. This huge massif is spectacular with its eroded sandstone mountains. Vegetation is composed of Uapaca bojeri, Pachypodium rosulatum, an endemic species in Isalo, Aloe isaloensis.  During the hike, possibility to see tombs inside the rock caves. During the visit one can spot 3 species of lemurs, birds and reptiles. Back to the hotel by the end of the afternoon. Around 04.30pm, visit the “fenêtre de l’Isalo” to enjoy the sunset. Back and overnight in your hotel 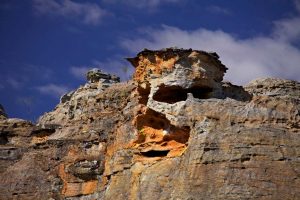 After breakfast, head on to Tuléar, the terminal of the National road N° 7. After 1 hour’s drive, we arrive in Ilakaka, a tiny village transformed into a busy town since the discovery of sapphire 23 years ago. We continue for another 1 hour drive to reach Zombitse National Park where we’ll have a 1 hour hike with a special guide in a semi-dry tropical forest, home to a few endemic birds and 6 species of lemurs.  From here, new scenery arises, composed with semi-dry forest of the west, baobabs tamarind trees, as we come closer to Tulear, we start to see thorny bush and from time to time some colorful tombs of  Mahafaly and Antandroy tribes. Arrival in Tuléar, the end of this long and stunning National Road 7. City tours of Tuléar before check-in to your Hotel on the beach outside of Tulear.

25/ Madagascar, the Galapagos of Africa

14/ The land of Contrasts